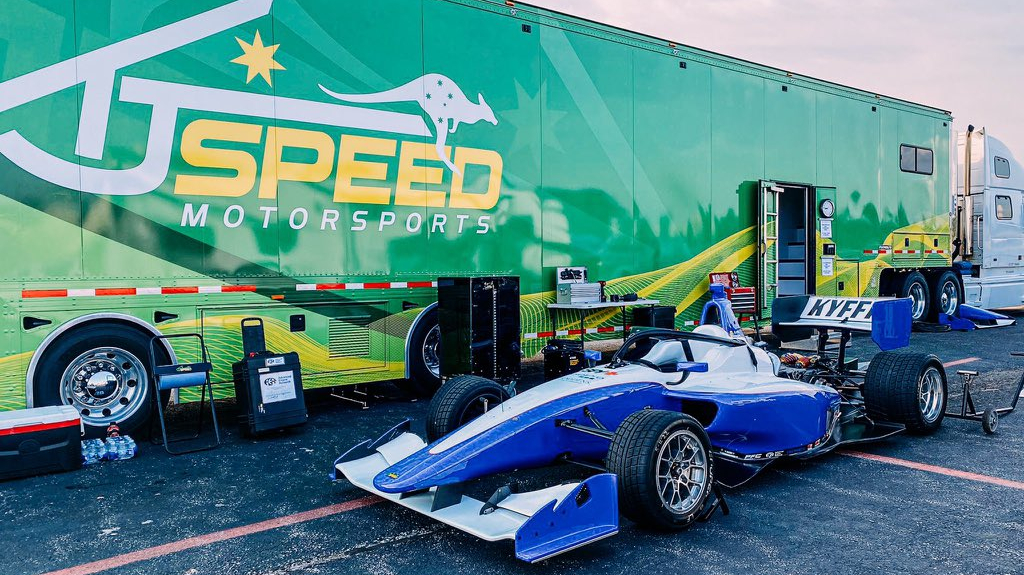 It was a glorious late summer day at Autobahn Country Club in Joliet, the Chicago suburb otherwise mostly known for its historic prison that starred in several Hollywood films. On this Tuesday in August, however, another type of history was written as TJ Speed Motorsports shook down its first Indy Lights chassis at the Illinois race track.

As the rear wing told the handful of observers, behind the wheel of the blue-and-white Dallara IL-15 was Kyffin Simpson, the 16-year-old force of nature from the Cayman Islands who has been turning heads in Indy Pro 2000 and Formula Regional Americas this year. In the latter series, Simpson runs with TJ Speed, so he was an obvious choice for the team to run its first Lights test.

“They were kind enough to let me shake down the car and it was an amazing experience,” enthuses Simpson a day after the run. No wonder: the Lights machines, with their 450hp power output, are a considerable step up from the machinery Simpson has been running so far. By all accounts, the shakedown test was a success.

The Joliet shakedown test was the first step of an extensive testing programme for TJ Speed, as the team prepares to enter Indy Lights in 2022 with at least two cars. The brainchild of veteran Australian race engineer Tim Neff, TJ Speed basically took over the lease on the Brownsburg, Indiana shop of the now-defunct Belardi Auto Racing organisation earlier this year, including a batch of Dallara IL-15 cars and all relevant tooling.

With the transaction taking place fairly close to the start of the 2021 season and the cars still without the required halo installed, Neff decided to focus the efforts of his outfit on joining Lights in 2022. The result is an extensive testing programme in weeks and months to come. Later this month the team will test at Barber Motorsports Park in Alabama, followed by test days at Mid-Ohio and Road America before another return to Barber.

“The Indy Lights program is growing, and it is the strongest it has been in a while,” said Neff. “Our goal is to test and get up to the speed of the series top contenders. This is not a series that you can just enter and expect to win. It will take a big effort and we are up for the task.”

Asked by F1 Feeder Series how things are progressing with the search for additional drivers beyond Simpson to perform testing and eventually racing duties, Neff says that the second car of the team is “a work in progress”. He adds that “I am talking to various drivers, some in the Road to Indy and a couple of them in Europe”.

As first reported by F1 Feeder Series, the entry of TJ Speed into Lights is the first of as many as three new teams for the 2022 season, with two existing Road to Indy teams also exploring an entry. On top of that, Pserra Racing is keen to add a second car to its programme next year. Sources inside the series confirm to F1 Feeder Series that while a 16–18 car grid is likely for 2022, as much as 20 cars are possible under the best scenario.

For Simpson, 2022 is something of a puzzle, but he would be the first to admit that he is mostly facing a luxury problem. While he has impressed with some sharp performances in Indy Pro 2000 this year and now has had his first taste of Indy Lights, the young man from the Caribbean is dominating proceedings in FR Americas.

With ten podiums and five wins in twelve races, Simpson is leading that championship by a healthy 50 points or so with only two rounds to go. If he goes on to win the FR Americas title, that would land him a USD 600,000 scholarship to compete in Super Formula in Japan. Can a 16-year-old have too much drives to chose from?

“Yeah, (Super Formula) would be really cool, let’s see!” Simpson says without committing to anything. “I’m exploring lots of options for 2022 and looking forward to confirming plans later in the season. Of course my long term goal is to race in IndyCar and this test is another step in the journey, but right now I am 100% focused on the FR title and improving in Indy Pro 2000.”